I am proud to share a birthday with Global Voices Online (December 11 — mark it in your calendars, ladies and gentlemen). I celebrated my 25th with friends and ungodly amounts of cheese, while GV celebrated its fifth with a series of wonderful retrospectives.

I am proud to share a birthday with Global Voices Online (December 11 — mark it in your calendars, ladies and gentlemen). I celebrated my 25th with friends and ungodly amounts of cheese, while GV celebrated its fifth with a series of wonderful retrospectives.

Me?  I’ve been holding off on writing my Global Voices anniversary post for the silliest of reasons: 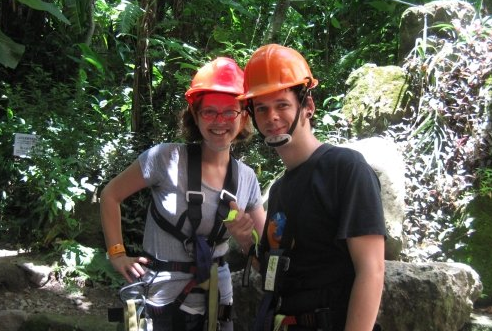 On the left is me, a bit disheveled after ziplining through the Atitlán Nature Reserve near Panajachel, Guatemala. On the right is Jeremy Clarke, who, in addition to being rather fetching in an orange helmet, happens to be both the first person in years to convince me to publicize my Facebook relationship status and the code and design wizard for Global Voices. (Bonus: the neon green thing in Jer’s right hand is GV Ferret, Global Voices’ unofficial mascot.)

When I posted about WordCamp NYC without mentioning Jer (he spoke at the event), I was promptly called on it by David Sasaki, who happens to be another member of the GV community. It feels wrong for me to slather love on Global Voices (which I’ll do shortly, no worries) without also mentioning Jer.

So: I mentioned him.

The thing is, Jer’s not the only person at Global Voices with whom I’m fallen totally, head over heels in love. GV is full of people who routinely challenge my perceptions of the world, remind me that the rest of the world is both indescribably different and infinitely more the same than I could ever imagine, bring awesome things to my attention and overwhelm me with their creativity and mad dance skills.

I’ve been a part of this beautiful community since May 2007. Over the last two and a half years I’ve had the privilege to meet and become friends with some of the most dedicated citizen journalists in the world. I think Jill puts it well:

These people, once strangers on the Internet, have become some of my closest friends. They are colleagues, people I trust, people I go to with questions, for news.

I’ve also been consistently awed by the scope and power of citizen media, from coverage of Obama’s election to the Beijing Olympics to the death of Michael Jackson.

For Hoa Quach, knowing GV-ers are out there, covering the world’s underreported stories, allows her to breathe easier. For Thiana Bondo, GV gathers the whole word together. For Lina Ben Mhenni, GV is a family and a school.

If GV has been anything for you in the past five years — birthday buddy, matchmaker, friend, news, family, school — please consider showing your support.

4 thoughts on “Global Voices: So much more than a blog.”