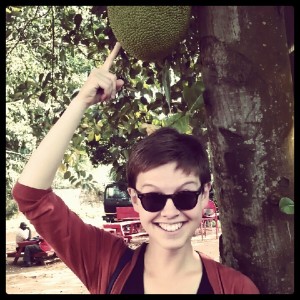 My name is Rebekah. I make things out of code, yarn, and flour.

I’ve lived in a concrete cube sans running water in rural Uganda, on top of a French restaurant called La Fontaine that was neither in France nor near a fountain, in a five-bedroom house in Lawrence, Kansas known for activism and Apples to Apples tournaments, and in an apartment in St. Petersburg with a marble bidet. I can exchange pleasantries in eight languages but lay claim only to passable shaky Russian and laughable Acholi.

I’ve worked as a software engineer, an Internet censorship researcher, a freelance web developer and graphic designer for projects in the United States, Uganda, and Kenya, an educational tour guide, and a math teacher (among other things). As a teenager I staffed a French fry station at a fast food behemoth for three months, something statistics say one out of every eight Americans does at some point in his or her life. If that’s true, I saved seven of my countrypeople.

Mikhail Gorbachev once told me I look like his granddaughter.

Interested in what I do now? Check out my work.

I used to blog under the name “Jackfruity,” which referenced a horrifically large fruit found in Uganda (among other places). As Jackfruity, I launched the Ugandan Blogger Happy Hour in Kampala in 2007, which as of late 2019 was still going strong, and covered the Ugandan blogosphere for Global Voices for five years.

I no longer follow the Ugandan blogosphere as closely as I used to (particularly now that so many of my favorite bloggers have moved over to Twitter and Instagram), but jackfruit (ffene) will always hold a special, sticky place in my heart.