Over at Wronging Rights, Kate and Amanda are puzzling over a recent TIME article that states the International Criminal Court is “compiling evidence of possible recent war crimes in southern Sudan, allegedly directed by Sudanese Defense Minister Abdelrahim Mohamed Hussein.”

This article—which name-drops George Clooney, weirdly enough—raises all sorts of questions. Kate and Amanda, who are Actually Lawyers, ask (and attempt to answer, somewhat) these questions far better than I can, given that I have but a single international human rights law class under my belt. That said, as I understand it, the ICC can’t just open investigations willy-nilly.

The problem here is that neither Sudan nor the newly formed South Sudan is a state party to the ICC, meaning the only way this case makes sense is if the Security Council referred it, which it didn’t. Kate and Amanda ask:

So, uh, what gives? Did the TIME reporter get an Enough Project report and mistakenly conclude it was an internal ICC memo? Or is there some other reason why the ICC, a court of limited jurisdiction and limited resources, would be spending the latter on an investigation that is clearly outside of the former?

This is, to me, where things get sort of crazy. Kate and Amanda asked law professor Kevin Jon Heller to weigh in, which he did:

My best guess is — as they suggest — that the OTP has received assurances from the new South Sudanese government that it will either (1) ratify the Rome Statute and accept the Court’s jurisdiction retroactively, or (2) file a declaration under Article 12(3) of the Rome Statute accepting jurisdiction on an hoc basis over the crimes the OTP is investigating. Either way, the issue would be how far back in time South Sudan could accept the Court’s jurisdiction.

He goes on to suggest a weirder (to me—speak up, international human rights lawyers, if you have something even weirder to add!) possibility:

South Sudan could invoke the Eichmann “precedent” and argue that a state should have the right to give the Court retroactive jurisdiction over any and all crimes committed against its citizens, even if the state did not formally exist at the time of their commission.

I’ve written before about my love-hate relationship with the ICC that’s mostly hate, and this latest apparently overreaching on the part of Prosecutor Luis Moreno-Ocampo feels like yet another misstep in a series of horrible missteps. That said, the pretend law geek inside of me is fascinated by it, and I’m looking forward to seeing if and how the ICC can justify this investigation as being under their jurisdiction.

Coming out of blog hibernation to show you this: 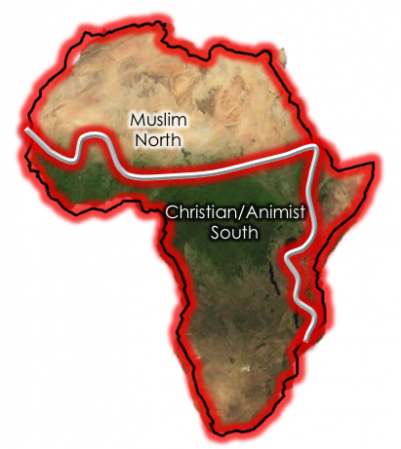 The map above makes up just under half of a TIME.com article by Thomas P. M. Barnett that so inanely oversimplifies African geopolitics (Muslim terrorism! China is scary!) that I’m almost at a loss for words. Shame on you, Barnett, and shame on Time for posting this.

My friend and Global Voices colleague Lova Rakotomalala is crowdsourcing a list of the 15 most influential musicians in Africa:

There is a list from 2006 on the Independent of the 50 greatest African artists, encompassing all type of arts chosen by a selected panel that also left a lot to be desired as far as representation of the whole continent (this might be a byproduct of deep cultural and lingual boundaries between regions).

Making a list for such a large, heterogeneous continent is bound to be flawed. But the purpose here is to celebrate and discover artists that do not get to receive the exposure that their western counterparts receive.

Top contenders so far: Nigeria’s Fela Kuti and Cameroon’s Manu Dibango. You can add your choices by commenting on Lova’s blog.

The Rwandan government has announced it may block the website of an independent newspaper if the paper does not obey a six-month suspension of its publishing rights.

Not content to simply ban the printed publication of independent newspaper Umuvigizi, the Rwandan government has announced that if the paper does not shut down its website it will take matters into its own hands by blocking the site.

Read the full story at the OpenNet Initiative blog.

In Rwanda? Help us track whether Umuvugizi is blocked!

Internet censorship reporting site Herdict allows Internet users to track which sites are blocked in their countries. If you are in Rwanda, please let us know whether you can access Umugivizi.com. You can submit a report via the Herdict reporter or using Twitter or e-mail.