Wandering children of Kansas away,
By mountain, by desert, or sea,
Feasting or fasting, at prayer or at play,
Whatever your fortunes may be,
Open the doors of your hearts to the breeze,
Prairie wind never are still,
Hark to the surf in the cottonwood trees,
The breakers that boom on the hill.
Open your soul’s windows–let in the sun–
The prairie sun gay with delight.
Where’er your wandering pathways have run,
Come home tonight.

Come home where Kansas lies under the stars
Twinkling back beauty and joy;
Come and let homely love poultice your scars,
Leave off your restless employ.
Come home where summer winds billow the wheat,
Where golden tides cover the sands;
Come–let your heart’s longings hasten your feet
And home love unfetter your hands.
Come where the tawny sunflower eagerly bends
A tawny frank face to the light,
So do our hearts seek the joy of old friends–
Come home tonight.

This might be my favorite thing I’ve ever knitted because Pac-Man.

After my sister unwrapped the ear flap hat I made for her, my brother asked if I’d make him one, too. Only beige, he asked, and maybe with Pac-Man ghosts on it?

I started with the same Norwegian Star Earflap Hat pattern, then combed the interwebz for Pac-Man ghost inspiration. This friendship bracelet pattern served as a good starting point:

The hat is knitted in the round, with 112 stitches total. The original snowflake pattern is 15 rows of 16 stitches each, making for 7 repeats. I tweaked the Pac-Man pattern (originally 12 rows of 11 stitches) to be 14 stitches wide and 15 high (and proudly pranced around the kitchen waving my homemade colorwork chart in Mr. Jones’ face until he acknowledged how awesome this accomplishment truly was), and then I got down to the messy, messy business of actually knitting it. 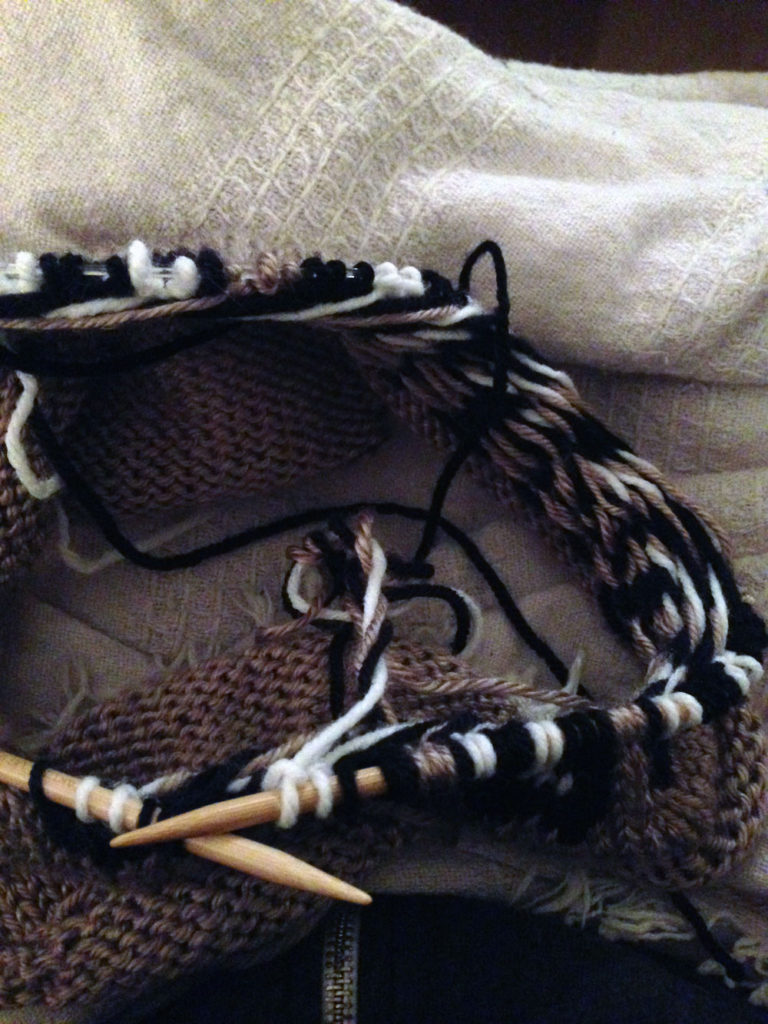 Ooof. With the background and the white and black for the eyes, I ended up working with four colors. I’m pretty sure this…isn’t a great idea for beginning knitters. Side note: I’ve seen a lot of tutorials on how to handle working with two colors, but nothing on using four colors simultaneously. Is this a ridiculous thing I did? Do people not do this? Is there a magic way to avoid having to stop and untangle your balls of yarn every twenty stitches?

Despite the tangles, I managed to finish the colorwork portion of the hat on Monday with only minor puckering, which I think I’ll be able to fix at the blocking stage. I now have ghosts! 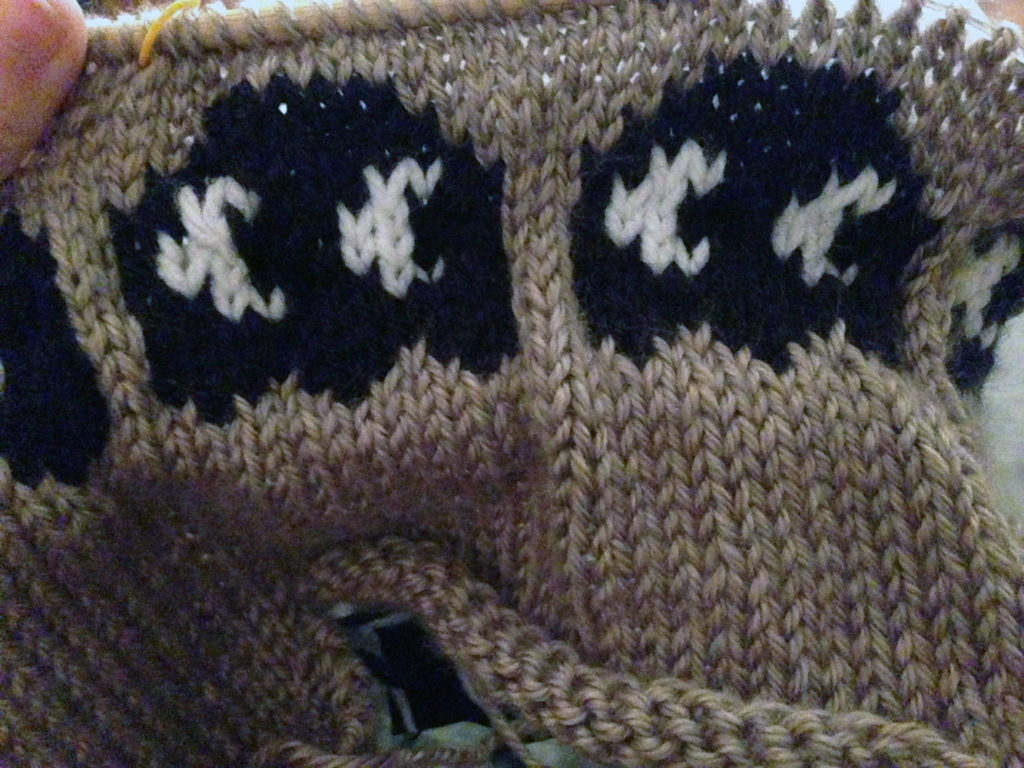 My brother asked for a “dull blue” as the accent color, which—I realized belatedly—means that these adorable creatures have no official name (and that the eyes don’t show up very well in pictures). I’m still kind of in love with them, though, and I’m looking forward to finishing up the crown of the hat and mailing it off soon. Hooray!

Lastly, and importantly: do you remember when Google made a playable Pac-Man doodle? No? Good thing I reminded you, then. Take three minutes today and see if you can beat my high score of (wait for it) 200.

Two projects I managed to cram in between the Plague of Death and winter vacation.

I had high hopes—so high as to be delusional—of hitting the ground running after Thanksgiving and making Christmas and Hanukkah gifts and decorations galore. Instead, I came down with a cold that had me at home in bed for over a week.

I manage to pull myself together by mid-December, though, and finish a couple of projects. I’m recording these more for posterity than for inspiration: the photos are few and grainy, and only of the end results, not of the process.

First up: a gift for Mr. Jones, who politely requested “adult footie pajamas with a hood and a zipper and a flap” for Christmas. It’s surprisingly hard to find a single pattern with all of these features. I looked at Simplicity 2853 (hood and zipper, no footies) and Simplicity 1731 (drawstring hood and zipper, patch pockets, no footies) before settling on Kwik Sew 3713, which has no hood and no zipper and no flap, but has footies and pockets.

I bought and downloaded the PDF version, which was…challenging (Step one: download and install a proprietary viewer. Step two: download a license for that viewer. Step three: download three different pattern files. Step four: weep as they print.). Indie pattern designers, you definitely win this round.

Mr. Jones and I scouted out both online and in-person shops for the appropriate fabric, but the one print he liked—check out the amazing deer/Fair Isle below—was sold out. At this point it was roughly December 17, and I decided to table the footie pajamas in favor of something a bit more realistically accomplishable before our planned gift exchange on the 19th.

Enter: the lobster pants. One free PDF pajama pant pattern from Simplicity and three yards of lobster-print cotton from Fabric Corner later, we were in business. 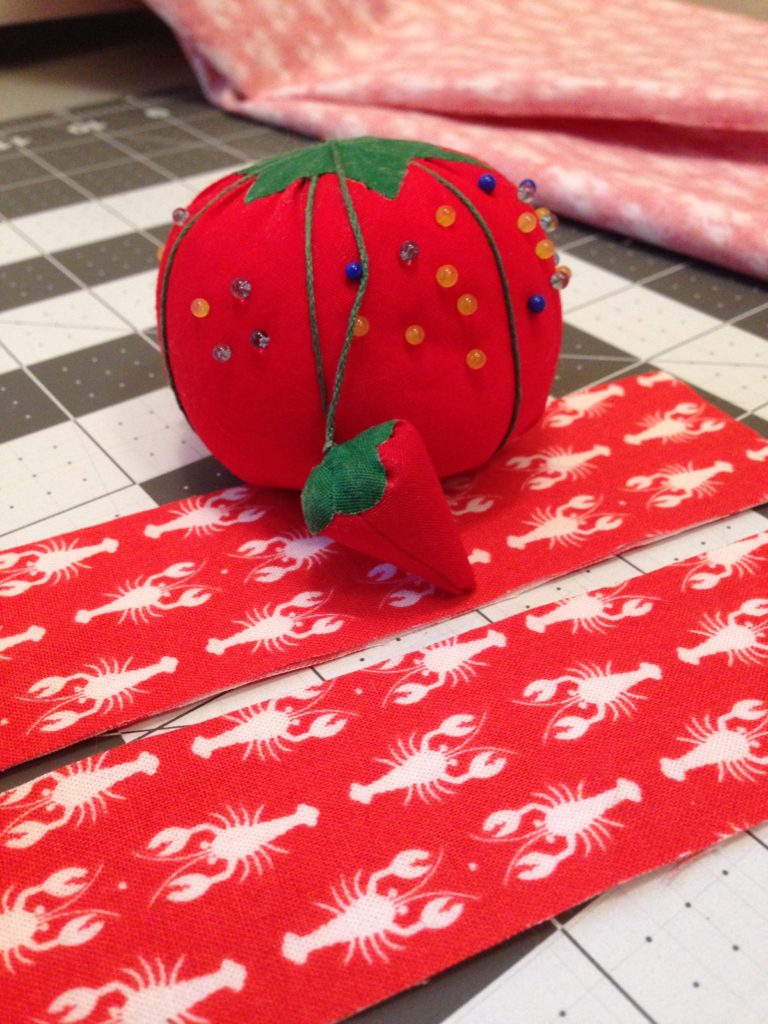 Hello, you creepy cockroaches of the sea.

This came together super quickly, despite the fact that I may or may not have cut one of the pieces out backwards, almost had a meltdown trying to turn the drawstring inside out with a safety pin (lesson: use a chopstick), and realized after I had completely finished that the elastic waist was too big, meaning I had to rip open the waistband, cinch things up, and resew.

All that mess (which, thankfully, Mr. Jones didn’t witness) aside, these turned out pretty well: 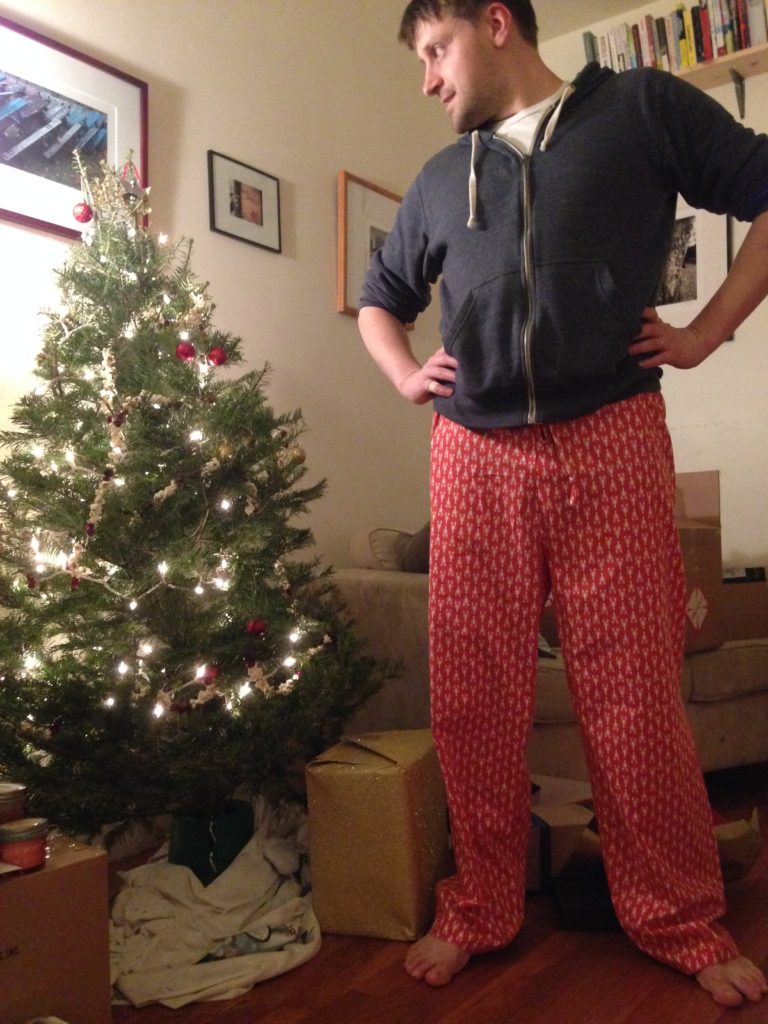 Sadly, by the time we made it from Massachusetts to Michigan to Kansas, the thread I used (Mettler 100% Cotton All Purpose) had started to break in several places, opening up the seams. Has anyone else had this problem? A bit of research tells me that a cotton-wrapped polyester might have been a better choice. After another pass over the seams (thanks, Mom!), they seem to be holding up fine for now.

Next up: knitting for my sister, who asked for an earflap hat. I couldn’t bear to buy one, so instead I swung by Gather Here’s Saturday knitting circle armed with the free Norwegian Star Earflap Hat pattern from Tiennie Knits on Ravelry.

This was my first time using DPNs (though I only used two at a time, so it wasn’t as exciting as it sounds), my first time knitting an i-cord, and—most thrillingly—my first colorwork attempt. Once I got the hang of the earflaps (which require you to pick up the loop between two stitches and knit into that in order to increase), this came together quickly: a couple of evenings, and it was done (slightly more detailed notes are on Ravelry, in case you’re interested). 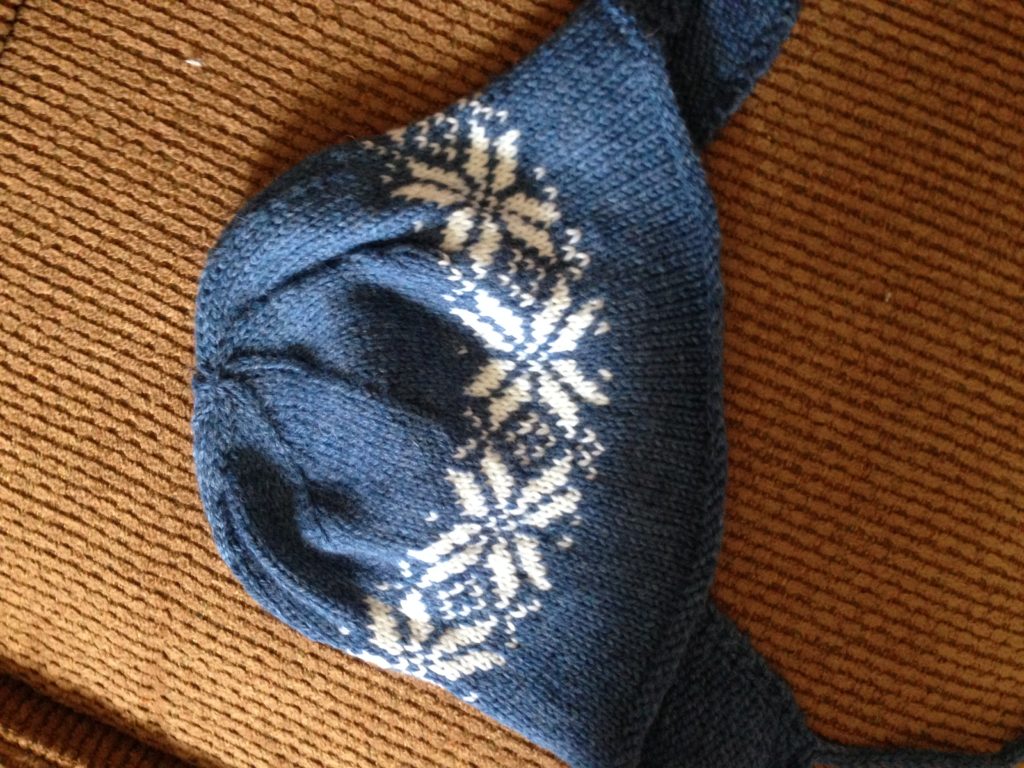 I have the earflaps knitted for a second version, this time for my brother, who saw my sister’s version and got a little jealous. A sign of knitting success?

I came back from winter break with a loooooooong list of things to make, including both projects I’ve had sitting in my studio for months and brand new ones, inspired in part by the gift of a serger (!!!) from Mr. Jones’ parents, pillow forms and a great bulletin board for organizing my notes and bits of ideas from my parents, and yarn from both sides. I’m toying with making that list public as a way to motivate myself to work through it, but I’m a little nervous about broadcasting my laziness so publicly. Is anyone else struggling with how dark it gets, and how early? These days, I come home from work and want to curl up in bed right away. Any thoughts on how to beat this, aside from “take your knitting to a tanning bed”?

I tracked every book I read in 2014, fairly certain I would reach my goal of 100 without too much trouble. I made it to 94, which is both galling and inspiring (how much reading will I be able to do this year, now that I’m not planning a wedding in three parts?).

At the end of May I did a midpoint check-in and found that I had already fallen behind. I made an effort to catch up in June and July, but in August I dropped back again. Despite what I consider to be a truly valiant effort in November (yay, vacation reading), I never quite managed to catch up: 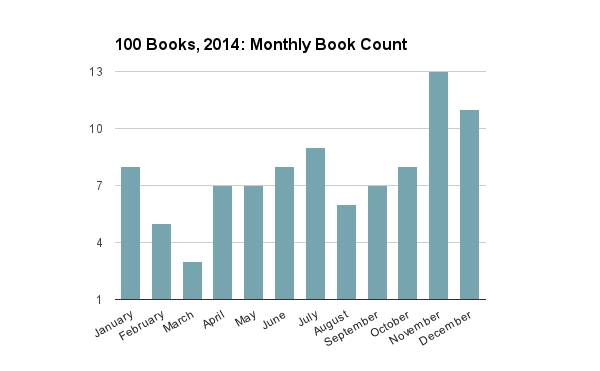 November also saw my greatest page count, clocking in at just over 6200 pages. Coincidentally, it was also the month I reread all of Harry Potter. 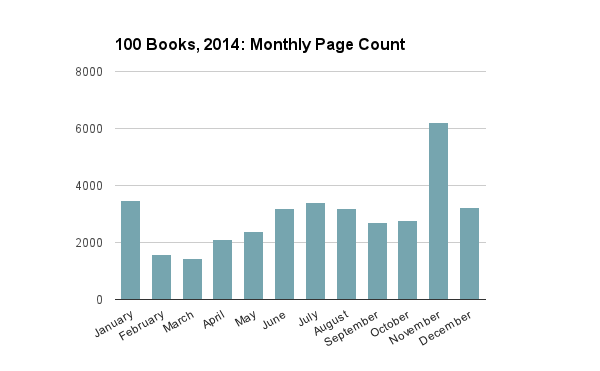 Fiction and memoir continue to be my favorites genres, though despite my pretensions to “literary fiction” earlier this year, around a fifth of the books I read this year fell into the young adult camp. See: Harry Potter, obviously, though also Charlie N. Holmberg’s wonderfully creative The Paper Magician and The Glass Magician. 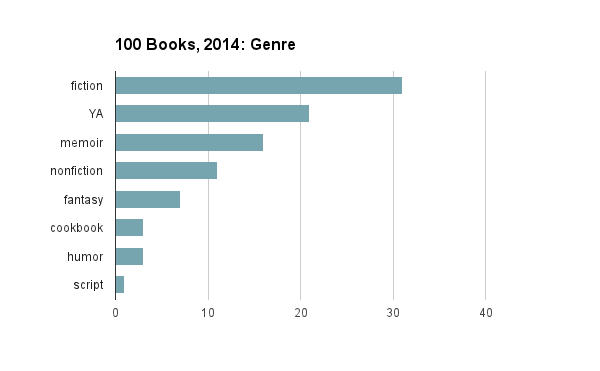 Also despite earlier pretensions: my attempts at reading books by a diverse set of authors failed pretty miserably. While more than half of the authors whose works I read were women, only ten percent were people of color, and eight percent people from the global south. 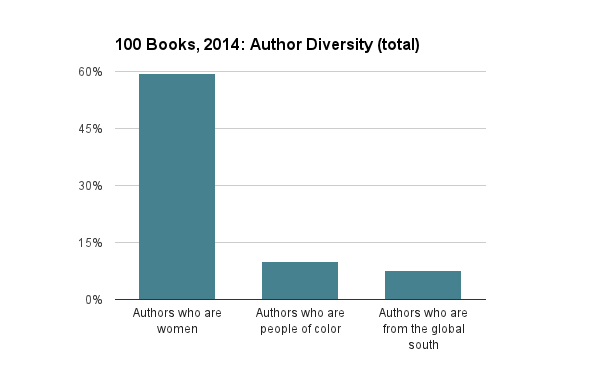 I’m disappointed by this, particularly given the many wonderful recommendations I received after I put out a call for help. Looking back at the reading list I made after that post, I’m realizing I only read half the books on the list.

I guess it’s a good thing, then, that I’m giving this another try in 2015. So far I’m one book in—David Mitchell’s Ghostwritten, which I loved—with Pico Iyer’s Falling off the Map: Some Lonely Places of the World on deck. I’m tracking metadata here and a simple list here, in case you’d like to follow along.