Monday was project presentation day: we each got five minutes to present our Tic-Tac-Toe games, and two minutes to field questions. I found myself strangely nervous—I was proud of what I had accomplished, but the thought of having to stand up and talk about it, justifying my decisions and explaining my approach, was terrifying.

The order of our presentations was randomized, and I drew one of the last slots, which gave me some time over lunch to open up a couple of different tabs and zoom in on a few things I wanted to talk about in my code—specifically, how I automatically logged users in when they signed up (this Stack Overflow question on passing additional data to AJAX callbacks, which I mentioned in my last weekly write-up, was helpful) and how I checked whether a game had been won or tied. I was proud of the first, and not so proud of the second—I still don’t think a Tic-Tac-Toe game should take 60 lines of code to figure out if it’s over, and near the top of my to-do list is streamlining this.

Taking the time to tee up a browser tab for each of my talking points helped the presentation go smoothly, and at the end, the instructors gave us each a rubber duck, then sent us home early to get some rest. All in all: a good day.

Our assignment on Monday night was to walk through a couple of intro to Ruby tutorials and, if we had time, to read Why’s (Poignant) Guide to Ruby. It….

You should probably read it for yourself.

And then, if it sparks your curiosity as much as it did mine, read Annie Lowrey’s 2009 piece for Slate, “Where’s _why?.”

I read the first half on Monday night and most of the second half on my phone while I was on the train on Tuesday morning, which didn’t in any way do this book justice. I think I need to go back and reread two or three more times at least, preferably on a large screen so I can properly appreciate the sidebars and illustrations.

Jumping into Ruby on Tuesday morning after working with JavaScript for the past year and PHP for several years before that felt like the Barden Bellas felt when they first saw Das Sound Machine.

A few initial notes/impressions (please don’t use these to teach yourself anything about Ruby—this is all Day One knowledge that may or may not be accurate/correct):

We also talked about classes.

A high-level view of Ruby (made by Artem S.): 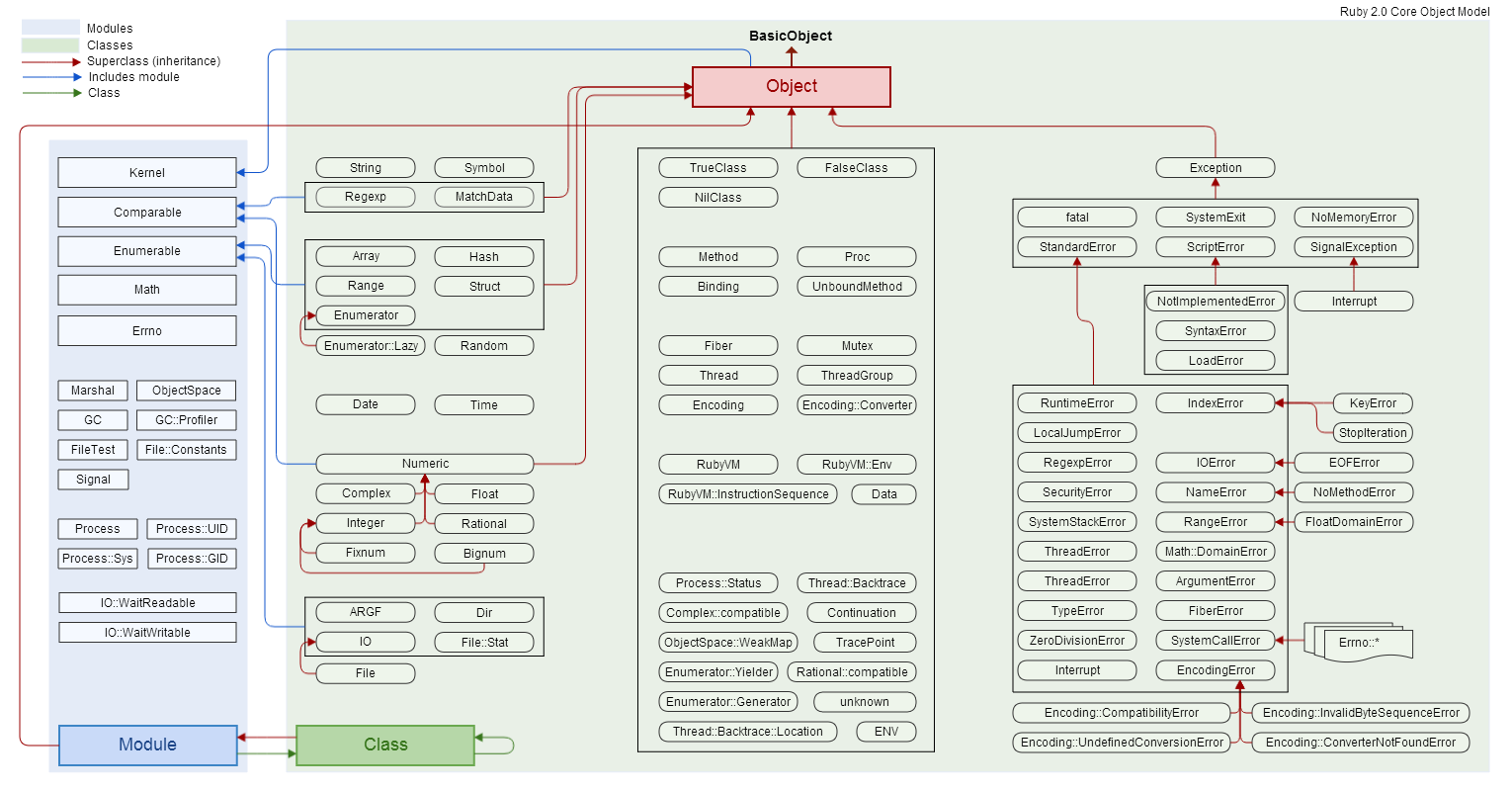 And a handdrawn version by Jerome Dalbert: 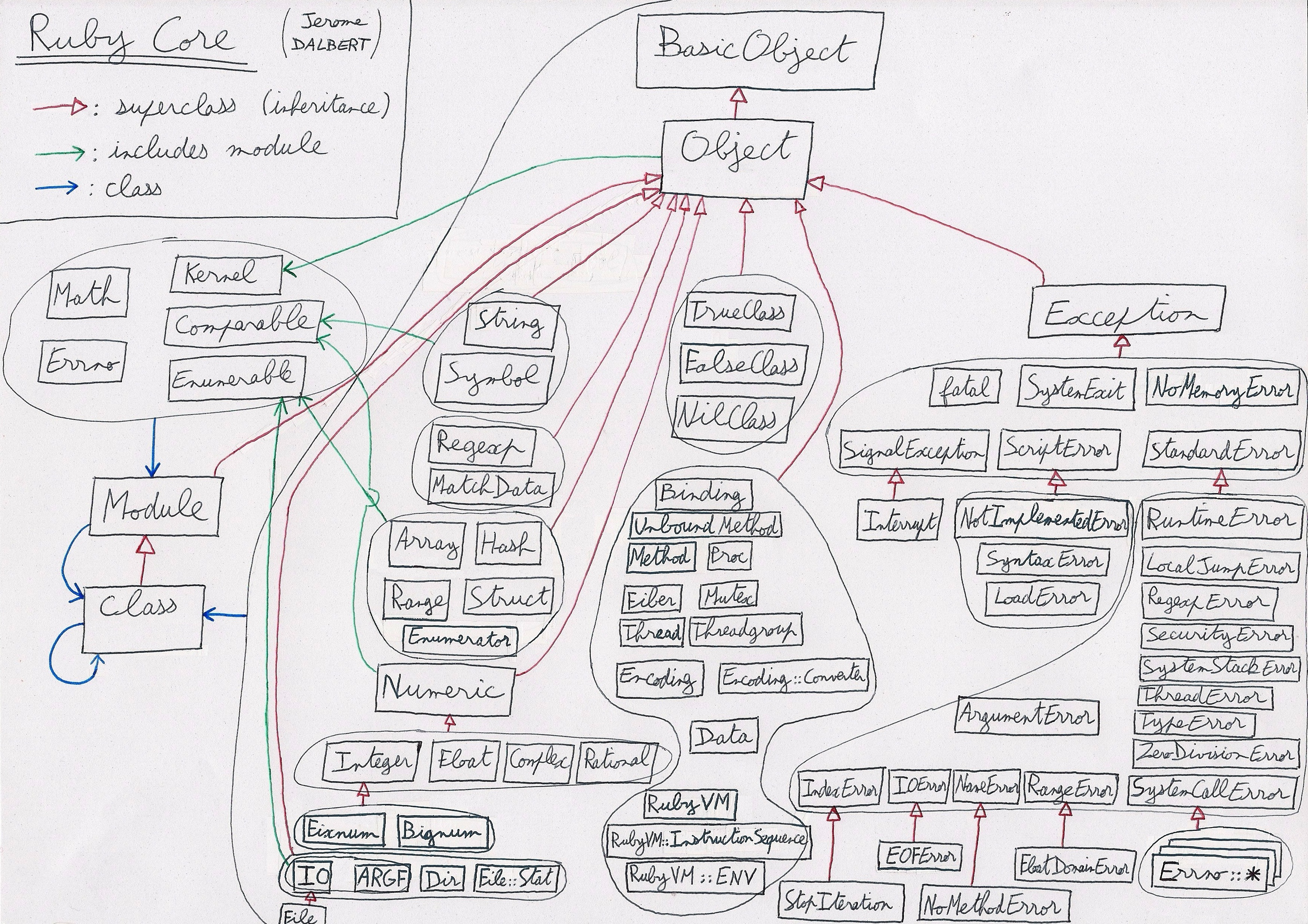 We talked a bit more about enumerables today, and introduced comparables: like enumerables in Ruby, comparables are anything that can be compared, that uses the comparable methods defined in the Comparable module, and that defines a <=> method (aka the “spaceship operator,” apparently so named because it reminded PERL expert Randal L. Schwartz of the spaceship in a Star Trek game).

We also talked briefly about how defining <=> on a comparable class allows you to use the .sort method, which made me wonder what Ruby’s built-in sorting method is. Fun fact: .sort_by in Ruby uses a Schwartzian transform, a sorting algorithm named after the aforementioned Randal L. Schwartz.

A few other notes:

Everyone I know who uses Ruby tells me it’s orders of magnitude better than PHP. I’ve people clap their hands in glee when I told them I’d be learning Ruby as part of GA. I’m hoping to feel some of that excitement soon, but for now:

Impressions of Ruby so far, as compared to JavaScript/PHP: it feels uncomfortably naked. pic.twitter.com/aHKZu55T26