For a class this semester, I wrote an article on gay rights bloggers in (mostly East) Africa. Since so many of them are blogren or connected to the blogren, I thought I’d share it with you. If you know of other gay rights bloggers in the area (or if you happen to be one yourself), especially women, please let me know in the comments — I’m putting together a new Google Reader list.

Uganda is the only country in the world whose cabinet includes a Minister of Ethics and Integrity. The position is currently held by Dr. James Nsaba Buturo, who has been charged with developing and coordinating the implementation of a national anti-corruption policy. Instead, Dr. Buturo has chosen to focus his political career on what he considers a much greater threat: homosexuality.

Dr. Buturo responded to a recent United Nations statement on sexual orientation and gender identity by accusing the UN, UNICEF, Amnesty International and a host of other international organizations of promoting an “abnormal, unhealthy, unnatural” lifestyle in Uganda. Sadly, he is not alone: in the last five years, a number of African governments have become more vocal against homosexuality, with many enacting harsher punishments for gays and lesbians. However, a group of Africans is fighting back.

Using nothing more than a computer and an Internet connection as their weapons, Africa’s gay and lesbian bloggers have begun to speak out against the discrimination they face. Spread throughout the continent and connecting online, they provide a safe, anonymous community for African homosexuals, as well as a forum for criticizing draconian government policies against homosexuality.

Gay Nairobi Man, a Kenyan who uses a pseudonym to avoid having his sexuality discovered by his family and employers, has been blogging about gay rights issues in Africa since March 2006. In that time his blog, Rants and Raves of a Gay Kenyan Man, has received over 30,000 visitors from 170 countries.

“I had a very tough time dealing with my sexuality and only came out to myself in my late twenties,” he writes in an e-mail. “I felt that I should demystify the Kenyan gay man and show another side of a gay person who loves life, is successful and is in a monogamous loving relationship. I also wanted to retain my anonymity, and blogging was the only way I could do that.”

The anonymity of the Internet is a major draw for African gay rights activists. Consensual homosexual conduct is punishable by up to 14 years in prison in Kenya; in Uganda, convicted gays and lesbians can spend life in prison. In other countries, punishments are even more harsh. Last May, the president of Gambia gave gays and lesbians 24 hours to leave the country or face “serious consequences.” And in the 12 states of Nigeria subject to Sharia law, homosexuality is punishable by death.

“I guard my anonymity. Very jealously,” says a Kampala-based blogger known as Gay Uganda. “My anonymity is the biggest and best shield protecting me in Uganda,” where last week two men were followed home and arrested after several people saw them kissing in a bar and reported them to the local police.

Gays and lesbians in much of Africa live in constant fear of being outed. Tamaku, who blogs at Diary of a Gay Kenyan, writes, “Kenya has a past of being a brutal police state…and due to corruption you don’t know who to trust.” In September 2007, the Red Pepper, a daily Ugandan newspaper, published a list of suspected homosexuals, along with their workplaces and home addresses. Many of those on the list suffered threats, discrimination and even physical attacks after the list was printed.

The source of such pervasive homophobia is difficult to pin down, but many Africans who are opposed to homosexuality claim that same-sex relationships are a Western invention. This idea is often supported by governments: multiple African leaders, including the former presidents of both Kenya and Namibia, have labeled homosexuality “against African tradition” and “alien to African culture.” Zimbabwe’s President, Robert Mugabe, has gone so far as to call it a “white disease.”

While these views are often widely supported by the public, they are not necessarily accurate. Decades- and even centuries-old traditions involving same-sex relationships have been documented in multiple cultures and ethnic groups throughout the continent, including the Meru of Kenya, the Maale of Ethiopia and the Mossi of Burkina Faso.

“I went to school in Europe, and I have tried to explain to people that I always knew I was gay long before my sojourn into the west,” says Gay Nairobi Man. Still, he and other gay bloggers often receive e-mails or comments on their blogs accusing them of receiving funding from Western organizations in exchange for promoting a gay agenda in Africa. 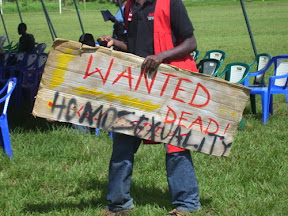 While thousands of dollars are indeed pouring into Africa from Western organizations focused on homosexuality, the majority of this money is funding anti-gay rights activities. Earlier this year Uganda held a four day “anti-homosexuality seminar” sponsored by Defend the Family International, an American organization devoted to “gay recovery.” Representatives from Defend the Family spoke to over 10,000 people at school and churches in Kampala. They also visited Parliament, where they met with nearly 100 senior government officials.

In contrast, when Uganda’s largest gay rights organization, Sexual Minorities Uganda (SMUG), held a press conference in August 2007 demanding recognition from the government, participants wore masks. “I do wish we gay people had the money and the ability to organize like these guys have accused us of being. I mean, it would just be fair, you know!” writes Gay Uganda on his blog.

Supakoja, a gay man who blogs under a pseudonym at AfroGay, compares SMUG’s funding to the money Ugandan anti-homosexual activist Martin Ssempa receives from a conservative American organization: “While SMUG is a local Ugandan organization with only peripheral foreign support from gay individuals and organizations, Martin Ssempa’s entire anti-homosexual…campaign is funded from Denver, Colorado,” he writes.

Despite the inequities in funding, Africa’s gay bloggers are doing what they can to promote gay rights offline as well as through their writing. Tamaku regularly petitions European Union officials, asking them to work with Kenyan authorities to increase protections for Kenyan gays and lesbians, and Gay Nairobi Man has collaborated with several people he met through his blog to sponsor the education of two Kenyan boys who were abandoned by their families after coming out as gay.

This kind of action – a blend of online and offline activism – is what makes bloggers such a strong force for gay rights in Africa. The ability to express their thoughts freely on the Internet, where the threat of being outed is considerably less intense, is enabling gay Africans to be more vocal about the oppression they face and making it easier connect with like-minded individuals.

To be sure, the recent government crackdowns on the gay community are worrying. Still, African gay rights bloggers believe there is light at the end of the tunnel. “The very act of writing about how I feel makes me feel a bit of the freedom,” says Gay Uganda.

“We are seeing a strong generation of gay men in their teens and early twenties who are not afraid to come out and demand their rights to be recognized,” writes Gay Nairobi Man in a recent e-mail. “This can only get better.”

3 thoughts on ““This can only get better”: gay rights bloggers in East Africa”