I somehow missed this, though it’s all over the New Vision, as well as the BBC, Reuters, NPR, and the Washington Post:

For those of you not hip to the East African political scene, that’s Ugandan President Yoweri Museveni, who apparently also goes by M7 Cent. It’s surprisingly catchy, no?

I just finished writing a paper on Ugandan president Yoweri Museveni for a class on African political economy. The starting point for the essay was an article by Harvard professor Robert Rotberg, in which he claims that “African leaders perform adequately during their early elected terms and then, in their second terms or beyond, become despots.”

Museveni’s currently serving his third elected term after an initial four ten-year “interim period” between 1986 and 1996. An examination of his 26 years in power shows that he’s done great things for Uganda’s economy while becoming increasingly authoritarian. 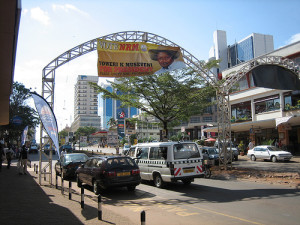 It just so happened that as I was in New York, paging through a mountain of books and articles, Never Man was on the streets of Kampala wondering about the same things:

I walk pavements up to the zebra crossing and wait for rude and pompous drivers in luxury saloon cars to pass so that I can walk again, across the firm and permanent tarmac of Kampala Road. All around me there are people talking to each other in loud, boisterous voices, arguing, joking, haranguing, talking on cellular phones about how expensive life is these days, because it doesn’t occur to them to think how much better it is than the days when life was cheap.

I try to imagine that I am invisible, just watching and not being seen, and I let the gratefulness overwhelm me, allow myself to be surprised that out of mounds of smouldering earth, we made this: pizza, and multi-storeyed glass-walled towers, and modern cinemas, and phone booths and cocktail bars and satellite TV and GQ magazine vending stalls.

And I try to stifle the sense that this is a fragile beauty, that it cannot last. That one day something will happen, something will happen to bring it all crumbling down and we will be back to 1986, and that when it does I will shake my head and say, “Shit. It was just a matter of time. It couldn’t last.”